there's a lesbian in the gingerbread

Yesterday, I spent the afternoon decorating gingerbread men people with Olivia and 2 of her friends.  I arranged mine in efficient little rows with typical utilitarian zeal, but the girls made a beautiful mess, creating replicas of each other, squealing and giggling with delight at their miniature frosting-laden selves.
As they bounded around the table slinging frosting, jots, and raisins, I kept to my assembly line.  Then at some point, I heard the word “gay” and tuned in more closely.
“No, he doesn’t look gay,” answered one of the girls.
“But it would be fine if he did,” chimed in another. [Think Seinfeld: “Not that there’s anything wrong with that!”]
Recognizing one of those rare moments when the kids had forgotten about me and had begun to talk candidly with their friends, I willed myself into invisibility.  I studied my cookie intently, fiddled with the placement of the raisins, and zippered my mouth.
I was so curious: What did these 11 year old girls have to say to each other about homosexuality?
“My Uncle’s gay,” offered the third without even looking up from the frosting mountain she was building.  I could see her in my guarded peripheral vision.
“Really?  That’s cool,” came Olivia’s response as she dug into the raisins.
“The other friend added, “The only bad thing about being gay is that some states won’t let you be gay.”
“You mean married, I think” – Woops – So much for my silence.
"Yeah, married.  Why can’t gay people get married?  That’s dumb!”
“I know!” agreed Olivia. “Who’s got the blue? Can I use it?...” and the conversation bounced on to something else.
Wow.  No need for gentle reminders about our house rules: “don’t feed the dog, leave your shoes at the door, and no hate-speech in the house!”
When I was their tender age of 11, I called my younger brother a “lesbian” with a biting derision beyond my years.  My father promptly marched me to the bathroom to wash my "filthy" mouth out with a bar of good old fashioned Ivory soap.   He paused for a second, the bar poised and ready.  “Do you even know what that means?” he asked.
Not to be mistaken for a less worldly person, I clarified that yes, I knew what a lesbian was.  I had called my brother a lesbian because he was such a girl.
So, at 11 years old, I had formulated that my 8 year old brother was so pathetic he wasn’t even man enough to be gay.
Ouch.
There are so many things to object to in that.  I don't know where to start.
I wasn’t raised explicitly to be hateful towards homosexuals, but I wasn’t raised to be tolerant either.  When you leave a void like that, someone or something will eventually fill it in.  Without other guidance, I had simply absorbed the homophobic messages of the world around me, learning almost by osmosis that homosexuality was a thing to be reviled and that apparently, the only thing worse than being a gay man was being a lesbian woman.
These words that I knew so little about gave me a place to put my anger; they also gave me a weapon to use against my annoying little brother.

I had learned the power of language.
Within months, however, my world would change when I discovered that my two closest (and slightly older) friends were in a lesbian relationship with one another.  Suddenly, the words “gay” and “lesbian” ceased to be abstract ideas on which I could pile my frustrations.  Instead, they described people I cared about very deeply.
When he punished me, I think my father hoped to wash away the word, and thus, the thing, but familiarity, a great weapon against intolerance, washed away the hate instead.
I’m grateful I had friends who were brave enough to teach me that lesson.

It occured to me as I looked over my neat rows of gingerbread men: where are all the girls?  In the past I've worked so hard to be sure my daughter had girls and women to identify with in her play (you know, like turning the playschool farmer into a woman).  Yesterday, however, I focused more on getting my part of the job done.  I didn't think about gender when I decorated my cookies.  Afterwards, I could see that their neutrality created another one of those voids, one easily filled by the label "gingerbread men."

I glanced over at the girls' cookies.  They looked very different from my neat, minimalist creations.  Most notably, many of them had long hair. 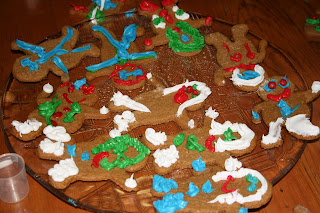 Of course they did.    And I bet if those girls hopped off the pan and ran out of the oven, some of them would turn out to be lesbians too. ﻿
Posted by dwerrlein at 11:25 AM