I took Olivia to see the excellent film, Miss Representation, this week. Since I cannot spare her from the all-penetrating gaze of men, society and the media, I have striven to teach her early to look back—to know the power of her own gaze. I hope that if she learns to keep a critical eye trained on the digitized she-fantasies of media moguls, then perhaps she will be less likely to turn that eye on herself.

The timing of this film is perfect for us. Olivia has just begun to look in the mirror with expectation. So far, however, she hasn’t found anything unacceptable there--saved, perhaps, by the great irony that, at age 11, she still lives in the kind of body to which the rest of us grown women are supposed to aspire. Like so many ears of corn, we’re to forever strip ourselves of our husks, our silken hair, and our many plump kernels of goodness, until there’s nothing left but a hard narrow cob to be accessorized with a boob-job and a pair of low-cut skinnyjeans. How truly hilarious that would be if it wasn’t so completely not funny at all.

I wish that someone had shown me Miss Representation when I was eleven. I did see a similar film, Killing Us Softly, in college. It’s about the ways that women are systematically sexualized and objectified in advertising. The message came too late, however. By the time I saw it, a fast/binge/purge pattern of disordered eating had long since entangled me in its ever tightening noose. I would follow its lead like an obedient dog, well into my twenties.

I do not want Olivia to skip out of her childhood into that snare.

Despite all the graphic and horrific images of women portrayed by Miss Representation, the most pernicious thing I learned is that men own the increasingly consolidated media. You don’t have to dig too deep into the theories of political science to learn that he/she who owns the means of communication in a society, controls that society. I did not realize how few women work behind the scenes (producing, writing, programming) in news and entertainment.

Suddenly I’m wondering, do we need a woman president?—or do we just need to take over Fox News? I hear they’re in search of a new figurehead anyway, what with good old Rupert being “unfit” and all. With the standard so low, surely even a woman could do that job!

No wonder women have taken social media by storm. What the male dominated communications industry has tried so hard to contain has come oozing out in blogs, on facebook and in tweets.

However, while we encourage each other to celebrate the portrayals of women that achieve these ideals (and reject the ones that don’t), we also need to look inward. I think there are a lot of women like me: ex-bingers, ex-anorexics, ex-selfhaters. We look and sound healed, but when this film asked me to examine that more closely, I admit, I discovered a residue. A dirty film left on my psyche by the colonizing eyes of men.

Case in point: I had to abandon my usual workout routine last fall because I injured my neck in a car accident. Instead of exercising my body all winter, I had to exercise patience, standing quietly by as I gained nearly 15 lbs.
It’s really no big deal. I know that.

Except, I lied about my weight on my driver’s license renewal last week. 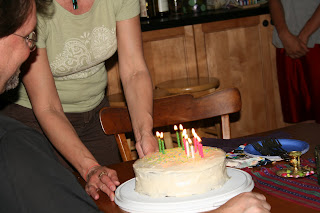 And, I wonder, what is the first thing you see when you look at this snapshot, taken at Steve’s birthday in March?
The cake? the candles?...Perhaps the roll of fat hanging over my pants in the background? Or if
we really want to take it apart, perhaps my veiny arms? Or my right hand? It looks sort of like the three-fingered claw of a sleestak from that 70s show Land of the Lost, don’t you think?

When I saw this headless photo, I picked everything about my body apart and piled the wreckage of it on the table next to me, a trophy to my inadequacy.

Even though I already knew it, watching Miss Representation reminded me of the insidious nature of such behavior. What’s so bad about a roll of fat? Who cares if my body type doesn’t fit the arbitrary beauty-norms of the late 20th/ early 21st Centuries?

I fit in perfectly if we just go back a bit. 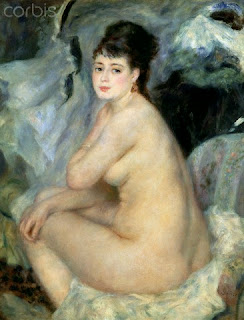 Here I am sitting on a sofa one day in 1876. I know I look a bit sad, but do you think I’m worrying with Renoir about the roll of fat that would have tumbled over the front of my pants were I modest enough to wear any?

Nah. I think I’m just feeling a bit resentful of this painter who wants me only for the beauty of my form.

Here’s another shot of me after the hunt. 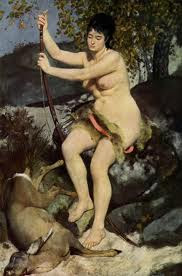 I know what you’re thinking: I’m ashamed of my plans to binge on yet another
deer. I’m gripping my bow, trying to talk myself out of the slaughter, reminding myself of the heft of my ass on the rock. It seems, doesn’t it, that I’m calculating the time: can I eat the beast, hide the evidence, and throw it up before my knight in shining armor comes along with a barrel-chested horse to sweep the tremendous bulk of me off my feet?

Nah. I think I’m just marveling at my excellent shot and wondering how the heck I’m going to get that thing home by myself. I’m also feeling a bit irked that I’ve been asked to go hunting then sit on a rock in the nude. Really, Pierre!

Renoir, known for his misogynist views, was said to have stripped women not only of their clothes, but of their agency in nude paintings where he equated their bodies with the earth. How interesting, however, that my body fits so easily into his objectified form, yet fits so badly into the expectations of beauty today. The men with the means to represent are just making this shit up!

Amazing, isn’t it, how the context and the narrative around our bodies so dramatically shapes our vision of them? If Renoir had painted my gelatinous belly in the background of a birthday cake, would art historians note it as a thing to be reviled, rejected and erased?

No. But if I ran for office in a few years and this picture that I’ve so recklessly shared on the internet, were discovered (as it would be), do you think it would make CNN? Would they get out the digital pens and circle the evidence of my weakness for emphasis, marking me as “unfit” for public service?

Even if you deplored the news story, would you inwardly cringe at the up close exposure of my belly roll?

You might. Or perhaps I should say, I might (sympathetically), if it were your belly, spread out over the expanse of a wall-sized flat screen TV.

If women like me, who have bent under decades of programming, want to honestly critique the unnatural standards of beauty foisted upon us by a male dominated media, then we need to start in earnest with the mirror.

We cannot truly reject the random fantasies of men until we fully accept the varied realities of women. With that, we can model for our daughters the self-love we so desperately want them to own.

So there you have it, for Olivia’s sake and mine: