When the kids are little, you're all "small house, big picture."  You imagine you're changing the world because the family is a mini nation and it matters if you feed your kids organic homemade granola bars instead of nutri-grain bars, or fresh fruit instead of fruit snacks.  It matters that you kept Disney out of the house because you resented the way that corporation pioneered advertising to young children, that you limited screens to one hour or less a day, that you sent up a feminist rah! rah! when your bullish daughter clobbered the unsuspecting toddler boys on the soccer field while wearing a pink tutu, that you taught your son to carry ants outside in the name of world peace, that you taught them both to pick up trash, conserve energy, walk instead of ride, and to forever hold love over hate.

Then you find yourself in the checkout line at the grocery store, your cart overflowing with individual-sized GatorAid and water bottles, paper and plastic dining products, fake-flavored chips, big-ag ground beef, white flour rolls, processed cheese and unnaturally blue frosted cupcakes because, just for this one day, for this one end-of-year party, couldn't our family please please be normal, Mom, PLEASE!?

Dejected, and even embarrassed by the the wagon-load of pure and unadulterated shit that you find yourself suddenly responsible for, you quickly and furtively stuff the plastic crap and the styrofood into your van, hoping no one, especially a reader of this blog, has seen you.  You quell the anguish in your thumping little eco-friendly heart by telling yourself it's just one day, that your family will return to it's green and healthy routines the very next morning.

But when you arrive home, you remember that things in your small house have taken a turn.  You find every light in every room glowing bright, two TVs blaring (why do you have two TVs?), the Xbox, YouTube, Instagram, Vine and unlimited text messaging all operating in tandem.  When you forget your indoor voice and demand to know who belongs to the pile of junk-food wrappers on the end table, your son swaggers through the room cradling an entire box of Little Debbie Oatmeal Cream Pies that he purchased after his newly-licenced buddies drove him the quarter mile to 7-11. He shrugs and says he'll pick it up "later."

You turn to your younger daughter for reprieve only to find her Instagramming herself as she dips gluten-free pretzels into a bowl of melted chocolate chips while watching Hannah Montana reruns out of nostalgia for the Disnified childhood you didn't know she had.  When she sees you, she leaps out of her chair because she's so excited to tell you that her new favorite line to her new favorite song is: "She's the hottest bitch in the house!" which she sings for you with unexpected "hottest bitch" know-how as she gyrates about the kitchen.

You despair that the "big picture" you so hoped to change with your little family is something so relentless and impenetrable that it will instead swallow your children despite your greatest efforts.  You wonder if you should even write about it anymore.

Until your niece sends you a music video.  When you watch it with your kids, your son says, "cool," and your daughter adds it to the short list of songs she overplays daily.  Their reactions ease your worries. On the surface, the video doesn't have anything to do with food, or plastic, or screen time.  It's about sexuality.  But in your moment of despair, it struck a chord anyway because for you, these things are all connected: Whether for the planet, the self, or the Other, you've tried to teach your kids about love and respect and justice. You've tried to teach your kids that it's all the "same love."   When someone else stands up with that message in a culture that wants to squash it, you are reminded to do so too.

As you may know, I participated in a sprint triathlon this past weekend--a try-athlon in my estimation.

For all my worrying about my knees, it was my ankle that most loudly objected to this endeavor.  It started complaining about two weeks ago, just after I posted about the race.  I could still bike and swim without aggravating it, but even walking caused pain and swelling for a time.  This meant I could not train for the run, at all.

Have you figured out yet that I'm a type-A in disguise?  (And are you laughing now because it's wholly undisguised and I just don't know it?).  Either way, it won't surprise you that I do not like to go places unprepared.  Showing up for this race, without knowing if my body could last the run, or if my ankle could even hold up for a walk, caused me a bit of consternation.

I thought the swim was good, but frustrating.  I got into traffic that forced me to stop and stand up in the middle of the pool on two occasions.  I may have said, "Are you kidding me?" when a lumbering man cut me off, but I hope I just imagined that because: how unsportsmanlike!  I eventually got to the end and heaved myself out of the water feeling relieved.  I'd been nervous about the crowded lanes, not sure I had the proper sensory equipment for swimming in a school.

Once on the bike, I relaxed.  This part was easy for me, so I tried to coast through it and save my energy for the dreaded final leg.

When it at last arrived, I laced up my shoes thinking, "It'll be fine.  I'll just walk fast!"  Then I looked at the line of volunteers who directed the way in front of me.  They stood cheering and pointing, ready for me to sprint out of the gate.   Was I really going to walk past them in the very first moments?

I couldn't do it.

Instead, I tried to run in a way that suggested I did this all the time.  I tried to give the impression that I would keep up this unreasonable pace for the duration, and not quit it the minute I rounded the corner.

The long and short of it? I ran three miles!!  In all honestly, my "run" is so slow, I think I may have finished faster if I'd fast-walked the course in its entirety.  I hadn't anticipated the spectators, however, and because I don't care what anyone thinks of me (really, not at all), I felt compelled to keep up the illusion of a run, regardless of how slow it might be.

So I have to ask, is it customary for runners to offer words of encouragement to one another as they pass on the trail?  Is this some kind of runner-culture-thing that I've missed out on all these years?  I'm thinking of the Jeep culture that surprised me after I bought one back in the coolio days of my twenties.  Jeep drivers give each other a way casual salute when they pass each other on the road.  Did you know that?  It gave me a great sense of community as a driver, suggesting to me that any of these fellow Jeep owners would offer late night road assistance if I needed it, without the threat of abduction or ax murder.

If no such runner-culture exists, then I must have been looking particularly in need of encouragement, because I got A LOT of it.  One person told me, "Looking good! Keep it up!" as I traversed the first downhill right out of the start.  I thought, "For heaven's sake, I hope I'm looking good, I haven't gone 10 paces yet!"

The thing is, we really only say "looking good" to people who, well...don't.  Right?  It's a way of appreciating the fact that someone is trying to look good--and I did say it would be a try-athlon after all.

One possible explanation: tired or not, my face gets really red when I exercise. Even if I feel great, this redness suggests I verge on some kind of coronary emergency.   We can blame my tendency to get overly flushed for one of the most tragic haircuts in the history of mankind when my mother, fearing I would collapse from heat stroke at the tender age of three, cut my toddler curls into a "pixie" cut that she thought would keep me more cool.   Check it out: 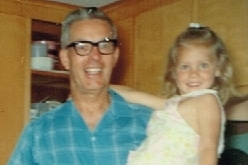 me and my grandfather.  I think I look cute and happy,
but apparently, I'm feeling overheated﻿ 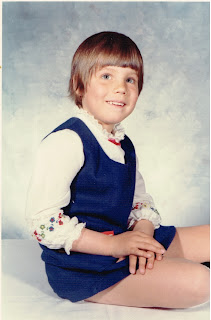 a year or so later, hair butchered, but feeling much refreshed
(and what's up with that short dress!!)

Despite my probably purplish hue, the ankle held, and I honestly felt OK as long as I kept to my snail's pace.  But the look of it must have really deteriorated because by the time I got to the final 100 yards (where I had begun to feel like a world champion because YES! I could see I was actually going to make it!!) someone clapped for me and said, "Just keep moving forward! That's all you have to do! Keep moving forward!"

Was there a doubt about whether I could keep moving forward?

Here's the thing.  If it had been a swim/bike event, I would have pushed myself harder in both.  I would have striven for speed! mastery! victory! Adding the run, however, turned all my focus to one simple goal: finish.

I think there's something to be said for going out and doing your best at something even when your best kind of sucks.  It's humbling and gratifying to show your weaknesses, because in the moment when you think everyone will laugh, they just might stand up and applaud.

That's an experience worth having.  In fact, when I crossed the finish line and everyone cheered, it made me want to cry just a teeny bit (I am prone to dramatic and unnecessary tears at sporting events).

And then it was done!  Exhausted and happy, I resolved to do it again next year (but perhaps not write about it quite so much!).  Then I went home where I collapsed and slept so hard on the couch that my race number, which had been written in permanent marker on my leg, imprinted itself on the used-to-be-cream upholstery.

Something to remember the day by, perhaps?