I took Gareth to look at colleges last week. While we considered a variety of obvious things like academics, cost and location, one thing that stood out for me about the different schools was the presence of school traditions: things like secret societies, painted rocks, tailgate parties, and annual ceremonies/rituals (that ranged from marching incoming freshman under a school archway to paint fights with the school president) . The schools that had traditions felt more bonded than the others, and the tour guides spoke with more pride about their school (after all, it's more fun to describe an annual mud volleyball tournament than it is to describe the smart classrooms just installed in the business building).

Or perhaps it was just my bias. I love traditions, mainly because I think they do bond a community together. By looking forward and backward, they give a shared sense of both purpose and history. In those things, I think we find security.

For this reason, I value the traditions in our family life. Most of them involve food, like baking my grandmother's recipes over the holidays or eating cake for breakfast the day after a birthday. I never thought we were tradition crazy or anything, but one holiday season a friend told me, "your traditions stress me out!"  Her comment surprised me and, I admit, hurt my feelings a little.

Why would traditions stress her out? After thinking about it, I realized there is a tipping point between having fun traditions and being bound to burdensome routines that create more work around already busy times of the year like birthdays and holidays.

I think the key to the former is to let your family traditions evolve with your family life. Almost all of our traditions come from a thing we did one year that we repeated the next year because it was fun.  For example, on the morning of your birthday in our house, we will wake you up with a blaring version of Cracker's "Happy Birthday" and dance around your room until we get tired of it.


Steve and I started doing this to each other before the kids were born. We like the line, "I'm feeling grateful for the small things today." Also, we thought it was funny to wake up to loud music, so we kept at it. We had no idea it was something we would still do with our children sixteen years later.

Other traditions come from long-time family rituals. For at least three generations, we have put butter on the birthday person's nose for good luck. So the morning of your birthday around here is particularly unpleasant because we will wake you up with loud music and give you a greasy nose.

The above two traditions have probably lasted as long as they have because they're simple. They don't cost money or require any extra planning, both of which can create pressure.

I learned to keep it simple years ago, after I had the brilliant idea to have my kids color a wooden egg every Easter. This "tradition" did not evolve from a fun activity we wanted to repeat. I imposed it because I imagined 10-15 years of egg painting would create this beautiful huge bowl of eggs that my kids would color with increasingly skilled hands as they grew.

The problem: this tradition involved a craft.  The idea of doing crafts sends chills down my spine. My kids aren't fans either. At the time, however, I thought this was a craft we could handle: wooden egg, markers, child. Done.

I had this idea for two years before I ever managed to purchase an egg. Then, after I purchased them, it took me a year to get the kids seated for the event. By this time, Olivia was 5 and Gareth was 8. Gareth, who didn't like coloring, thought it sounded more like a chore than a fun ritual, so I had to make him do it. To make it worse, we enacted this fun celebration of Easter a week after the holiday because I was too busy to make it happen earlier.

That was 2005.  Apparently, we never got back to it for 6 years, because the next eggs I have are dated 2011! By then, Gareth was 15 years old. Again I made him color an egg because, "look, we started this "tradition" and I don't have any eggs! Someday, when you're 30, we'll think the egg you painted when you were 15 is sooo cute!!'" In that year, I changed things up and painted an egg myself, and made Steve do one too. That way I could put them out for display because it gave me enough to cover the bottom of a small cereal bowl.

Needless to say, the tradition that I planned didn't come to fruition. But another one did. Now, the "tradition" is something more along the lines of how Steve and the kids color an egg for me each year because they feel sorry for me because my tradition didn't work. The kids look at their eggs and say, "Remember when you made me do this one!?" and we all laugh with nostalgia.

So, after all that, I still ended up with this: 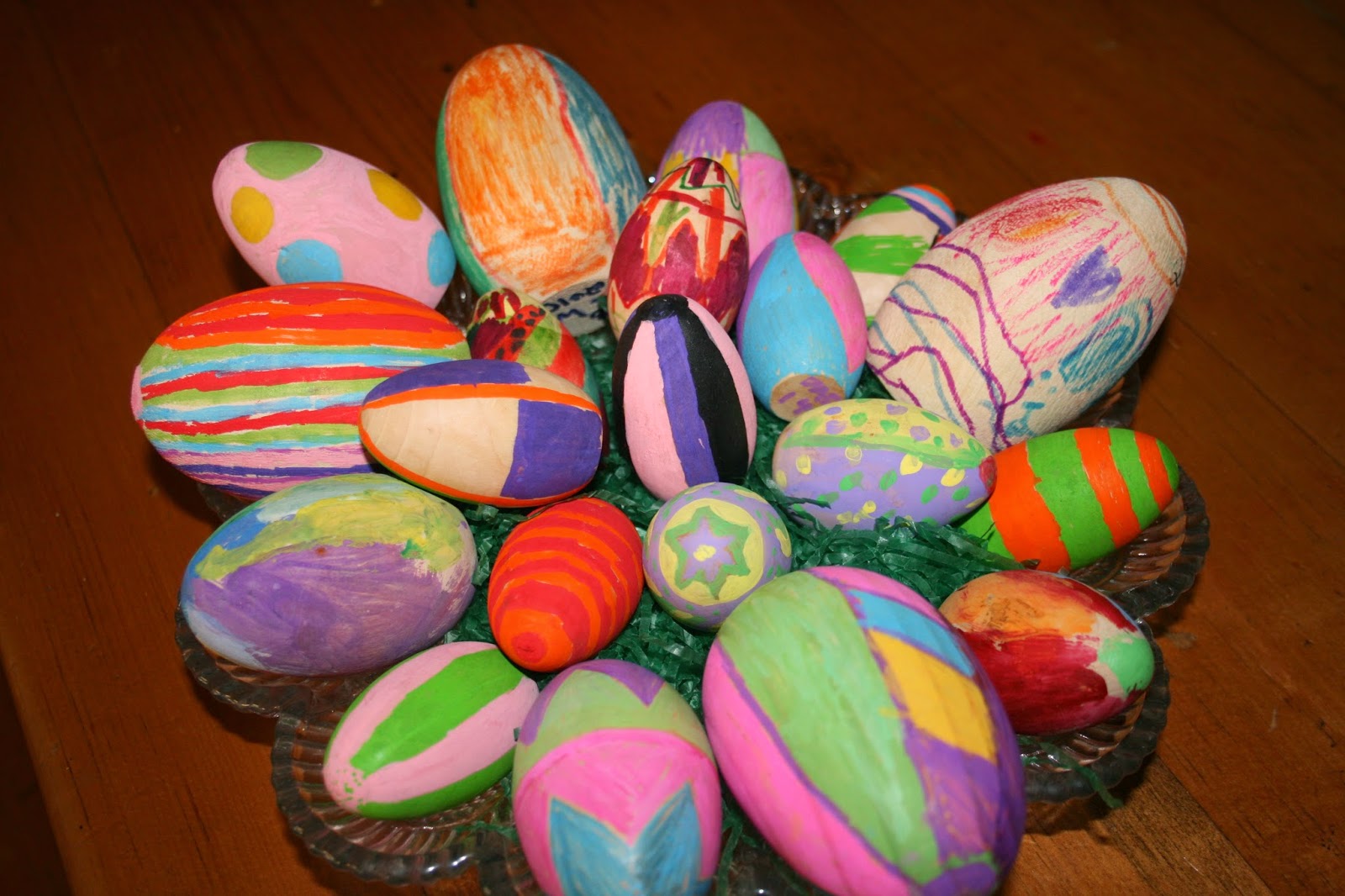 Not too shabby, but hardly a childhood record of Easters-gone-by (several eggs are painted by parents and several others by my kids' friends!), but still a charming if not telling display of our family's relationship to crafts.

So, the lesson is: make your kids participate in traditions and you too can have a big bowl of painted eggs!

I still think traditions are a fun way to bond any group, especially a family. But the key to good traditions is to let them evolve from fun things you already do so you don't create more work for yourself.

Also, if you don't want your traditions to "stress you out" or otherwise feel burdensome, don't plan them around chores you dislike (for me: crafts and shopping for anything, especially craft supplies).

And finally: be flexible. Don't feel pressure to make your tradition happen every year. Just because you miss it for one year (or five) doesn't mean it's over. Pick it up again when you can, if you want. And let it be what it is: a fun way to celebrate a holiday or a birthday, or perhaps just a pity party for mom!

Posted by dwerrlein at 2:36 PM No comments: