Remember at New Year’s when I made a resolution to keep a houseplant alive?


I had hoped to buy a new plant for the experiment, but it seems I'm no better at buying plants than I am at watering them, so I turned my attention to the two plants that already have the misfortune of belonging to me.


Both are philodendrons (the kind you can only kill if you, as the primary caretaker, die yourself and leave the occasional responsibility of watering them unmentioned in your will).  While many other plants have met their demise under my austere roof, these two have somehow survived--probably because they both have sentimental value (and because of that unkillability factor I just mentioned).

The first was given to me by my mother when I went off to college in 1985. She wanted me to have something green in my dorm. I usually kept it in more of a pale yellow state, but a strand of it has somehow persevered anyway.


I received the second plant when my dear grandmother passed in 2002. She won it in a bingo game at her retirement home and kept it on her coffee table where it thrived in a big tangled poofy bouquet of greenery. She used to trim it to keep it from taking over the room.
Desperate not to kill it, I've always kept a cutting as an insurance policy.  Not surprisingly, however, I have managed to kill the cutting on numerous occasions.  This, in fact, appears to be one of them: 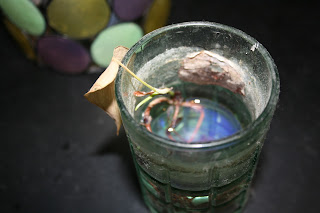 Actually, can you see the shoot of green coming out of the root?  When you live on the edge as my plants and I do, such a show of fortitude is cause for great celebration.  That, my friends, is a sign of life!

When the cuttings do die (completely), I shift into crisis mode and take extra special care of the potted plant (provide water) until I feel it’s healthy enough to make another cutting.  Then, without intending to, I slip back into my usual pattern of anxiety and neglect.


You see, I make light of all this, but my desperately thirsty plants cause me unremitting stress.  I read somewhere that plants feel pain. This is a horrifying idea to me. I wonder: do they have voices that moan and wail in a frequency unmatched to the capabilities of my very human ears?  Do I live obliviously in a madhouse of suffering, the air filled with the keening of unheard stress and despair?


I think I might.  I know my sister hears something that I don't.  Whenever she visits, she waters my parched and raspy philodendrons, claiming that she “can’t stand it another second.”


While I am apparently missing this piece of moral engineering, I am determined to change it.  I tell myself that I am not the product of my biology.

So I have been working diligently to keep my two plants in a happier state.  I've watered them regularly and given them new soil.  I trimmed off their dead parts.  And I've succeeded!  If we had Plant-Killers Anonymous, I could stand in front of my horticulturally challenged peers and report that after a lifetime of staying dry, my plants have enjoyed 64 days of damp!

While they're both much smaller than they were when I received them so many years ago, they at least look happy, don't you think?

﻿
I'm so proud of the progress I've made that I'm thinking of installing a plant-cam.  I could broadcast their new growth in a live feed of moment-to-moment thriller action on this blog.  Think how you would tune in with the fam every night just to watch the thriving!


I'm making these plans.  I'm celebrating my triumph.  Then, while busy composing this victorious post about how I’ve turned over a new “leaf,” I noticed this: 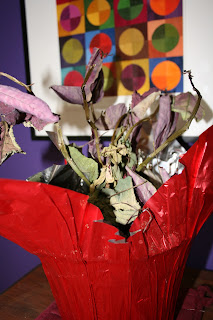 Right here under my roof of resolutions.

I suppose it's too early for the plant-cam after all.
Posted by dwerrlein at 4:59 PM

Email ThisBlogThis!Share to TwitterShare to FacebookShare to Pinterest
Labels: houseplants, planticide, we can change