In 1972, Olga Korbut turned an international eye to the world of women's gymnastics while sporting a bad case of bed head and a blah, ill-fitting leo. 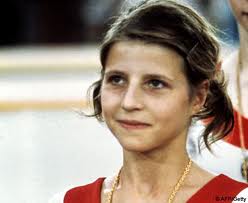 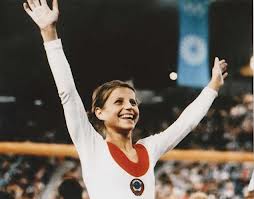 She looked like a rumpled kid practicing her craft in the gym.

As she should have.

Four years later, another little girl took the world by storm.  She charmed us with her shy smile and her perfect routines. 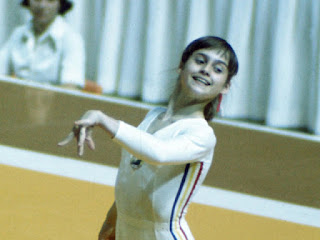 When Mary Lou Retton hit the scene in 1984, she drew attention for her powerhouse performances and her girlish grin.  Even with her eye makeup in this studio appearance, the producers capitalized on strength, patriotism and joie de vivre, not sex.


Times changed quickly after that.  The 1996 team, including stars Dominique Dawes and Kerri Strug, look more produced in their satiny outfits and glossy lips. 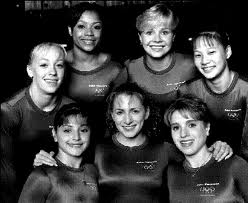 Although they still look girlish, the sexify ball had begun to roll.  These gymnasts plucked their eyebrows and traded the national uniform for costumes that varied from event to event.


Fast forward to 2008 where Nastia Liukin gives us pink and sparkly sequins.  Really?  No red, white and blue on the gold medal podium? 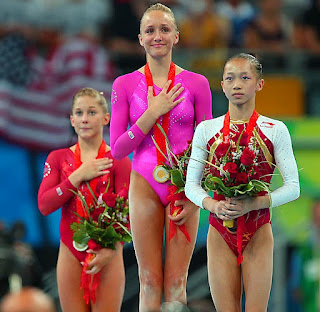 Compare Nastia, who wore at least three different costumes during her 2008 events, to Nadia who not only wore the same leotard in every 1976 appearance, but had the gall to bring it back for the next Olympics in 1980.  Clearly, we didn't watch Nadia for her outfits. 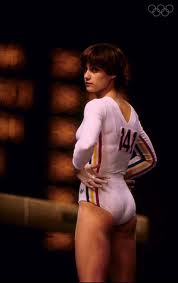 If you're going to wear a fancy sparkly costume, then you better go for the make up too, right? We could easily put these polished head shots of Nastia and Shawn on top of evening dresses.  While the makeup may be reasonable for prom night, is it really the look of athletes who just medaled in the Olympics? 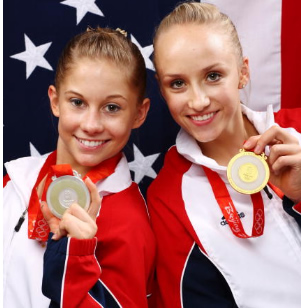 Phrases like "girlish grin" and "prom queen" no longer come to mind.  If the eye makeup isn't enough, we have glam shots like this rather grotesque NBC representation to make us squirm and perhaps, vomit. 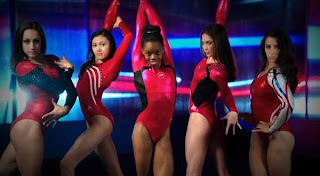 I know lots of folks have complained about NBC's Olympic coverage for reasons of timing. I give them a fail for their willingness to throw young female athletes under the sexify bus in their rush to get to the ratings parade.

Posted by dwerrlein at 3:07 PM