You might know from my last post that I have been sick.  While I was lying around on the couch feeling sorry for my achy old self, Olivia did a lot of “cleaning.”  Since she is not a child to stay focused on any one thing for very long, I should have been suspicious, or at least curious, about the sustained attention she devoted to her task.  But really, I couldn’t be bothered to lift my throbbing head.


What was she up to?  Well, you know how kids grow so suddenly?  At the end of summer, you discover their sneakers have shrunk and their long pants have an unexpected capri quality to them?


That's what we're talking about.  When I finally rose from my stupor last week, I discovered something unexpected sitting out in the hall:


While I had convalesced, Olivia had combed through her room and winnowed out the trappings of her early years. Having collected her childhood, she then cast it off and left it, like a too small sweatshirt, lying forlorn and bedraggled on the floor outside her bedroom door.

When I ventured by, I found a haphazard bin of figures: pollies, barbies, horses and littlest pets.  None of these creatures had seen the light of day for at least a couple of years, but suddenly, their presence under the bed had become intolerable, so they'd been extracted and summarily rejected.  Two bins of Legos, rendered useless.  A train set:  history.  A defunct pottery wheel and an old bag of clay:  trash. 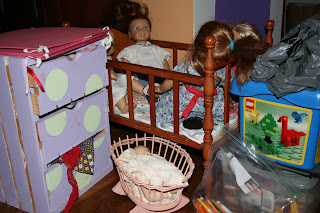 She even rolled her doll crib right into the hall and set it adrift in the world with the dolls still sitting politely along the rail.  They looked so expectant when I passed, as if waiting for tea that will never be served.  I told them, "Look chickies, the party's over."  I pointed to the miniature cups and saucers posed delicately in their basket nearby.  I showed them the small dresser of doll clothes we painted to match Olivia’s room so many years ago, and I explained how it doubled as the traveling trunk that would dutifully follow them en route to the attic.

With a sardonic roll of my eye, I noted to myself that we probably wouldn't see that trunk again until I, egad, became a grandmother.  I thought I heard a snicker from the crib, but when I looked, the dolls just stared back: silent.


I want to say this purging took me by surprise.


Freed from the past, Olivia looks intently forward, in “One Direction.”   Yes, that is what fills the cracks and crevices so recently left empty by childhood: bad tween music.  And don’t forget the paraphernalia that comes with all that sentimental crooning: posters slapped on the wall, I ♥ Harry Styles (really? like “I ♥ hairy styles?") written in bubble letters on the outside of notebooks, and lists of One Direction “fun facts” compiled and catalogued for emergency reference.


Must we trade tea sets for boy bands?

How is it that moving through these milestones can be so exciting, curious, and yet, painful?  We're so happy to put away the diaper pail, but we're hard-pressed to let go of the baby.  We want a few hours to ourselves, but then we spend them worrying about how Junior's getting along in circle time.  We're so proud when little angel first rides a two-wheeler, but then we tremble with fear as she wobbles away on the sidewalk.

Parents.  We are first-rate nut jobs!

I never even cared much for those dolls, and you know I hated the pollies and Barbies.  (Although, I admit Olivia taught me a thing or two about subversive play when she cut off all her Barbies' hair and dressed them in cut up old socks that she decroated with markers).   Still, after nearly banning them from the house, now I want to have a pang as they go back out the door?

And does this mean I'll shed a sentimental tear when the One Direction posters come down in a year or so?