it takes serious green to be seriously green

And that sucks!  I do little things every day to try to reduce my carbon footprint.  And I’ll keep doing those things because they give me hope; they give me peace of mind.  But like most people, when I do something, I want to do it right.  I want to do the little things AND the big things.
When I saw Who Killed the Electric Car? a few years ago, I vowed to my husband: we’d never buy another gas guzzler.  The film highlighted yet another way we have been manipulated, as a culture, into filling up.  From the sprawling development of the suburbs, to the ripping up of perfectly useful streetcar tracks, to our poor public transportation system, we have never really had a choice but to purchase gasoline by the gazillions of gallons.  It burns me up—like expensive fossil fuel in an internal combustion engine, you know?
Meanwhile…someone killed my car a few weeks ago, totaling what was supposed to be my “last” gas guzzler. 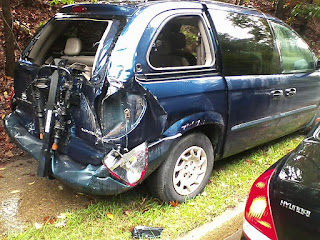 I intended to drive that 9 year-old rattle trap for 3 more years, until Gareth graduated from high school.  By then, I was going to have miraculously saved up a whopping 40k to buy an electric car (err…that wouldn’t be the college fund, would it?).  And I was going to have my solar-business-owning friend rig up some solar panels to charge it.   Steve told me I was pipe-dreaming from the get-go.  Of course he was right, but I held to my fantasies.  “You never know!” I thought.
Well, I was right too.  I certainly didn’t know.  I didn’t know my car would end up in the junk yard before I could work my $40,000 miracle.  The accident has forced my hand.  To replace the van, I have only the pathetic $4,000 we got from the insurance company.
Dammit – where’s that last zero?!
Oh – got it. Instead of buying a 1 year old car, we bought a 10 (see it there?) year old car.  Since no 10 year-old-electric car exists, a “new” guzzler sits in my driveway looking thirsty, waiting for me to screw on the tags so I can hurry off to the gas station and fill ‘er up like a good little enabler. 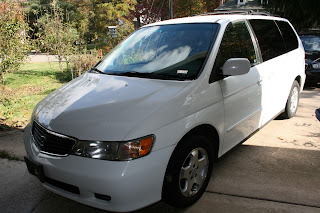 It turns out I’m green alright, green with envy for all the folks with enough green stuff to buy the green stuff.
Aaargh!
Posted by dwerrlein at 11:21 PM